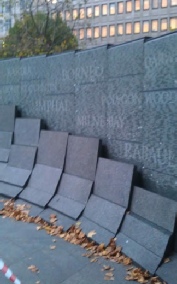 The Australian War Memorial at Hyde Park Corner, London was unveiled on 11 November 2003, on the 85th anniversary of Armistice Day.

The memorial commemorates the Australian service men and women who served in World War I and World War II.

Rowe and Martin successfully worked on the Australian War Memorial at Hyde Park in 2010.This was an extremely high profile project to repaint  approximately 250 000 letters . Engaged at the feasibility stage to utilise their expertise and subsequently  appointed to work on this project which was completed on time and within budget.